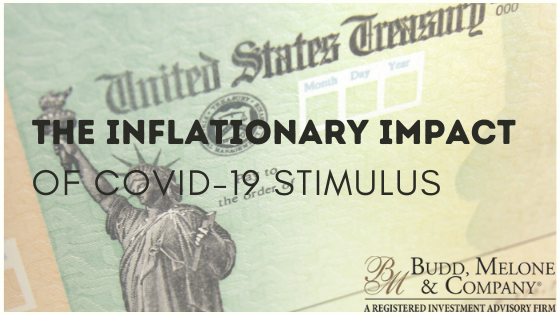 The Inflationary Impact of COVID-19 Stimulus

Should you worry about inflation, deflation, hyperinflation, or stagflation?

The coronavirus outbreak, which was first detected in China, has infected millions of people in hundreds of countries and has left global governments, businesses, families and individuals around the world counting the costs.

In the U.S., as in many other countries, the response has been unprecedented, as federal, state and local governments, along with our central bank, have stepped in aggressively. And with states beginning to reopen for business while Congress debates additional stimulus measures, it’s important for investors to understand the inflationary implications that these massive economic stimulus packages might have on our economy, the stock and bond markets and our retirement plans.

Since early March, the Federal Reserve has taken bold and drastic actions not seen since the Great Financial Crisis of 2008. Consider just some of the action by the Fed:

In all, the Federal Reserve’s actions have provided the bulk of the more than $6 trillion worth of liquidity to our financial system. And economists are warning that we might be headed toward higher inflationary periods, maybe even hyperinflation, or worse: stagflation.

Hyperinflation, by extension, is exactly what it sounds like – inflation that is increasing at super-sonic speed. In technical terms, hyperinflation is described as inflation exceeding 50% per month. Although the U.S. has never experienced hyperinflation, other countries have. In fact, in October of 2019, the International Monetary Fund estimated Venezuela’s annual inflation rate for 2019 would be an astounding 200,000%. That’s hyper.

Every month, the Bureau of Labor Statistics, part of the Department of Labor, calculates indices that measure inflation:

Why is the Consumer Price Index so important? Well, for those receiving Social Security payments, a version of the CPI is used to calculate cost of living increases, for example.

Each month, the Bureau of Labor Statistics (BLS) collects “prices of food, clothing, shelter, fuels, transportation, doctors’ and dentists’ services, drugs, and other goods and services that people buy for day-to-day living. Prices are collected each month in 75 urban areas across the country from about 6,000 housing units and approximately 22,000 retail establishments (department stores, supermarkets, hospitals, filling stations, and other types of stores and service establishments).”

All this data is then weighted, adjusted and tied with a pretty bow before it’s released to the public.

The Components of the CPI

But we should never take a set of data at face value. For example, housing makes up 41% of the total calculation, according to the BLS in its latest press release and housing prices are up significantly in the past 8+ years.

In fact, according to the National Association of Realtors, the median existing-home pricefor all housing types in March was $280,600, up 8.0% from March 2019 ($259,700). Further, March’s national price increase marks 97 straight months of year-over-year gains.

Meanwhile, we are currently experiencing big deflation in the price of gasoline, because a gallon of gas has decreased by 24 cents from a month ago and $1.11 from a year ago, according to AAA. But gasoline only makes up about 3% of the total CPI calculation. And since most of us probably fill our gas tanks more often than we buy a house, we feel the impact of deflation in gasoline more (and when gas prices are rising, we feel the impact of inflation more).

How the Fed Tries to Control Inflation

In order to help the Fed stabilize prices, Congress gave the Fed a very powerful tool: the ability to set monetary policy. And one way the Fed sets monetary policy is by manipulating short-term interest rates in an effort to control inflation.

If the Fed believes that market conditions will lead to inflation, it will attempt to slow the economy by raising short-term interest rates – reasoning that increases in the cost of borrowing money are likely to slow down both personal and business spending. The flip side is also true too: if the Fed believes that the economy has slowed too much, it will lower short-term interest rates in an effort to lower the cost of borrowing and stimulate personal and business spending.

Currently, the Fed believes that “inflation at the rate
of 2 percent (as measured by the annual change in the price index for personal consumption expenditures, or PCE) is most consistent over the longer run with the Fed’s mandate for price stability and maximum employment.”

Although inflation has inched upwards over the past five years, from a low of 0.7% in 2015 to 2.3% last year, the most recent CPI numbers show that inflation still has not found its way into the broad economy, despite all the money that government stimulus created. And if you look toward the Financial Crisis of 2008 for guidance, you’ll see that inflation peaked at 3.2% in 2011.

Part of the reason that inflation did not increase dramatically since 2008 and why it might not next year, is because sustained inflation doesn’t generally come only as a result of rising prices on goods and services. It is also due to wage increases which contribute towards inflation for two reasons:

So, while some prices are up lately, don’t look for robust inflation to appear unless wage levels rise appreciably. And that is not likely to happen soon.

The Risk of Stagflation is Very Real

The term stagflation was first used by UK politician Iain Macleod in the 1960s when he was discussing current inflation that was accompanied by stagnation, calling it a "stagnation situation." It was used again during the 1970s oil crisis, when the U.S. saw five quarters of negative GDP growth along with double-digit inflation and unemployment approaching 10%.

The truth is that there are consequences born from the coronavirus and resulting actions taken by the federal government and the Federal Reserve that are difficult to predict. If we fast forward to when economies begin to reopen, it stands to reason that production will be negatively impacted for quite some time as the recently unemployed slowly rejoin the workforce.

Further, whether there is a surge in demand from consumers and businesses, encouraged by historically low interest rates, remains to be seen. But the risk that we see slow economic output as prices (inflation) increase – the very definition of stagflation – is very real.

What Investors Really Need to Remember

If you’re wrong and we find that the inflation rate for the next 25 years turns out to be 2%, then the purchasing power of your retirement savings will be more, not less.

And it’s generally best to be on the side of caution.

No investment strategy or risk management technique can guarantee return or eliminate risk in all market environments.

The opinions voiced in this material are for general information only and are not intended to provide specific advice or recommendations for any individual.

The Standard & Poor’s 500 Index is a capitalization-weighted index of 500 stocks designed to measure performance of the broad domestic economy through changes in the aggregate market value of 500 stocks representing all major industries.

Dow Jones Industrial Average (DJIA), or DOW, is the most widely used indicator of the overall condition of the stock market, a price-weighted average of 30 actively traded blue chip stocks, primarily industrials. The 30 stocks are chosen by the editors of the Wall Street Journal. The Dow is computed using a price-weighted indexing system, rather than the more common market cap-weighted indexing system.

The NASDAQ-100 is composed of the 100 largest domestic and international non-financial securities listed on The NASDAQ Stock Market. The Index reflects companies across major industry groups including computer hardware and software, telecommunications, retail/wholesale trade and biotechnology, but does not contain securities of financial companies.

This article was prepared by RSW Publishing.